I’m not much of a big city girl, but I thoroughly enjoyed the city of Buenos Aires. There is so much history and life there. It is often referred to as “The Paris of South America”.

I arrived in Buenos Aires early on a Friday morning. It was my first time out of the country alone in about 10 years. I was nervous. What if traveling alone wasn’t what I thought it was going to be? What if I got mugged, what if I lose my passport, what if I get lost? Early in the morning, the streets of that city are empty. No one really gets out and about in Buenos Aires until 11ish at the earliest. When I planned my trip, I chose to stay in the “Bohemian” neighborhood of the city, San Telmo. Frankly, all I can think as I am arriving in this neighborhood is that it looks super shady. Since it’s very early and I’m tired from the long flight, I checked into my hotel, Bohemia Buenos Aires, and took a nice long nap.

At around noon I headed out to walk around a bit. I had heard there are some good markets around where I was staying. This is what I always do when I first arrive somewhere- wander around markets. I’m really too tired to do much of anything else after a long flight, and it’s a good way to get accustomed to how things are in a new place. Before leaving my hotel, I changed my mind a million times about stuff like- should I carry my purse, should I carry my money, should I carry my passport, on and on. I finally left the hotel and was happy to see the streets very busy and all my worrying was for nothing. I walked through some of the eclectic little antique markets and produce stands. There was tons of antique jewelry, furniture, instruments, and vintage books. It was very interesting. I wanted to save my appetite for the dinner and tango show I was going to that night, so I just got a couple of empanadas for lunch.

Throughout the world, Argentina is known as the home of tango. That evening I was treated to one of Buenos Aires’ most emblematic and luxurious cultural highlights; a Dinner and Tango Show that I arranged through SAY HUEQUE. I got to experience an intimate live tango performance by some of the top dancers in South America, accompanied by a live orchestra. The tango show was accompanied with a delicious Argentine dinner and of course, all of the Malbec or Cabernet wine that I wanted.

The “Carlos Gardel Corner” (Esquina Carlos Gardel) is situated in the heart of the Abasto neighborhood, right on the passage that carries his name and where the city placed a statue of him to remember him. When I arrived at the theater for the show, the hostess looked my name up and seated me. I could not believe my luck. I had been seated with a group of three very handsome men. We introduced ourselves. Neither of them knew each other either, they had all come on their own. My dinner dates were a lawyer from Colombia, an accountant from Bolivia, and a chef from Brazil. Thank God I speak Spanish. We started having a nice chat. I could not get over the fact that I am seated with these handsome professional men who are traveling on their own and are willing to spend their $85 on a dinner and tango show.

The show lasted 90 minutes and presented 22 people, among musicians, dancers and singers who displayed their art in an ambience that recreates an imaginary theatre / cabaret of the thirties with the luxury, enhancement, sophistication and glamour of a time that marked the entry and reign of the tango in the most select circles of the society. 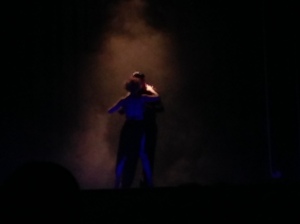 I also had another day and night in Buenos Aires on my way back from my hiking trip in Chile. Sundays are the best day to be out and about in the city and I’m glad I got to be a part of that. It’s a very lively scene in the afternoons. There’s the markets, and lots of people just enjoying the various parks in the city.

I did a guided city tour in the morning that I arranged through SAY HUEQUE.
It was a half day tour that provided me with a general view of the city and its attractions. I visited Retiro, Palermo, 9th of July Avenue (the Colon Opera House and the Obelisk), Downtown (the Congress, the Mayo Square, Mayo Avenue, Government House), Puerto Madero and San Telmo with stops in Recoleta (cemetery and Francia Square) and La Boca (Caminito).

Inside the Cathedral of Buenos Aires. This is where Pope Francis used to work. 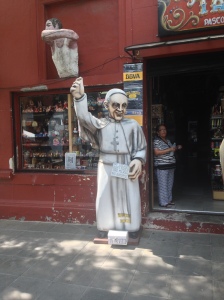 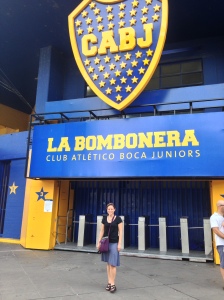 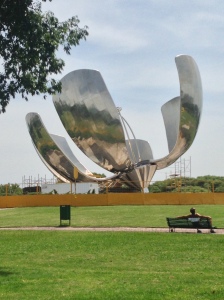 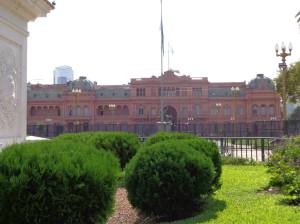 In the afternoon I wandered through the busy Feria San Telmo. This is a huge street market full of vendors selling anything and everything- antiques, souvenirs, clothing, and food. There were also street musicians and tango dancers performing for tips.

I had lunch in this neat little restaurant where there was an adorable old man playing the piano. He was the owner of the cafe. Once the restaurant filled up he would invite the patrons to dance tango with him. He asked me first , but I had to tell him that I did not know how.  Next time I’m in that city, I am going to take a lesson.

Buenos Aires is definitely a city that I can see myself spending more time in.  I would encourage anyone to go also because it is very affordable with the exchange rate.  I stayed in a very nice boutique hotel with breakfast included for only $40 something a night.  When you go out to eat for lunch, order the daily special and not off the menu, you will get a wonderful huge lunch for around $10.   Lonely Planet’s guidebook was a good resource for finding lodging, restaurants, and guidance on which areas are safe to walk around in and which areas to avoid.