On my last day in Oaxaca, I went on a full day tour that included many interesting stops.
Leaving the city and heading into the countryside… 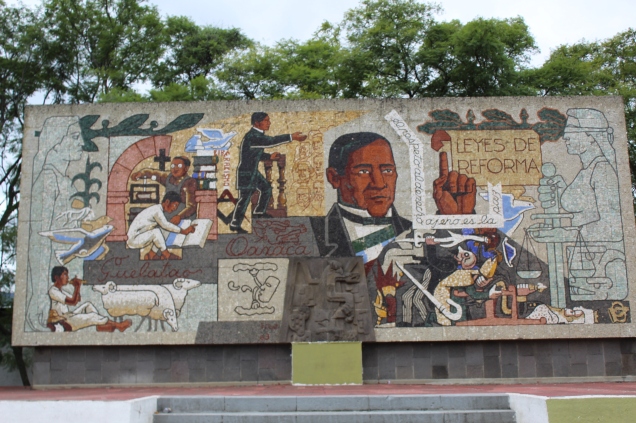 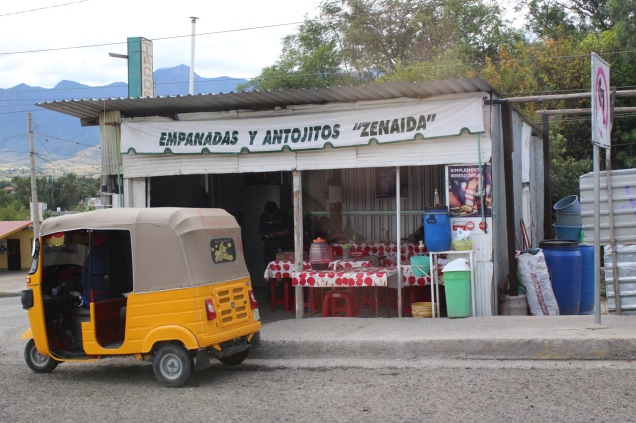 The first stop was a gigantic 2000 year old tree in the town of Tule. The people were setting up to celebrate Mass around the tree. As the Mass began with the opening blessing, fireworks were launched. Now I know why I had been hearing explosions all the time. 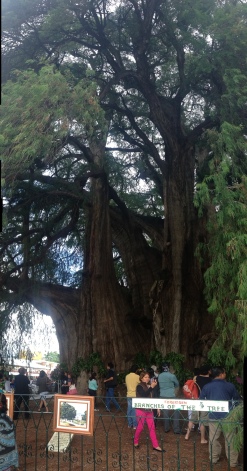 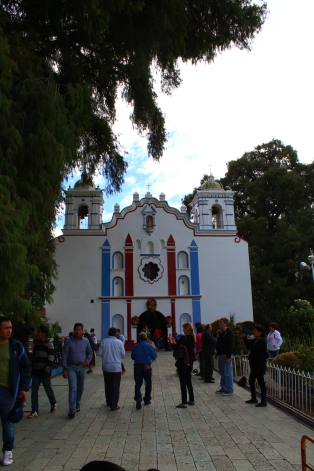 The church at Tule 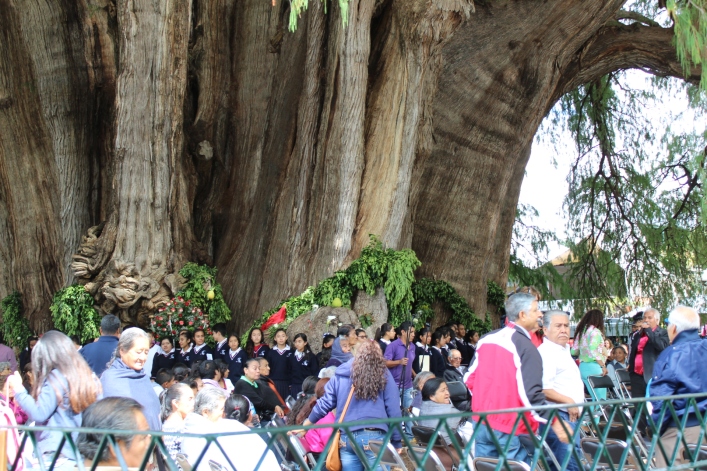 Setting up for Mass around the tree

Then we made a stop at Teotitlan del Valle to see how rugs are made. The family spoke an indigenous language to each other, but the lady who gave us the demonstration could do her presentation in Spanish, English, and French. I bought a beautiful handbag here. 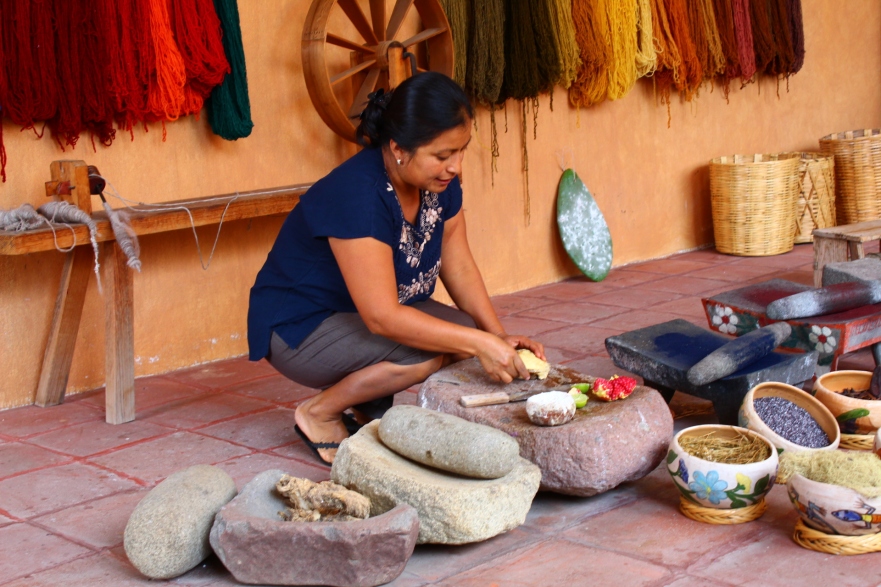 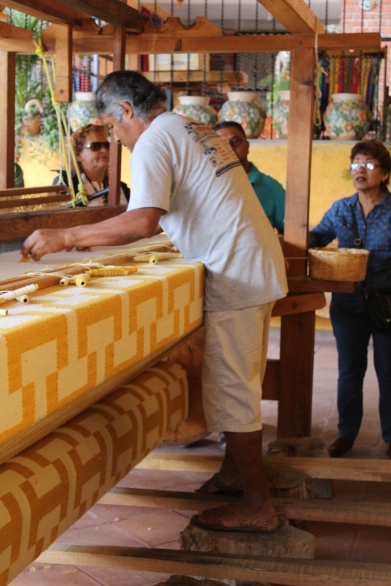 A weaving machine with pedals

Then we drove a very winding and bumpy road up through the Sierra Madre mountains to the municipality of San Lorenzo Albarradas to see Hierve el Agua. Hierve el Agua (Spanish for “the water boils”) is a set of natural rock formations that resemble cascades of water. The site consists of two rock shelves or cliffs which rise between fifty and ninety meters from the valley below, from which extend nearly white rock formations which look like waterfalls. These formations are created by fresh water springs, whose water is over-saturated with calcium carbonate and other minerals. As the water scurries over the cliffs, the excess minerals are deposited, much in the same manner that stalactites are formed in caves. One of the cliffs, called the “cascada chica” (small waterfall) or the Amphitheatre, contains two large artificial pools for swimming as well as a number of small natural pools. One of the artificial pools is very near the edge of the cliff. I would have liked to spend more time here, as there were a few hiking trails around. 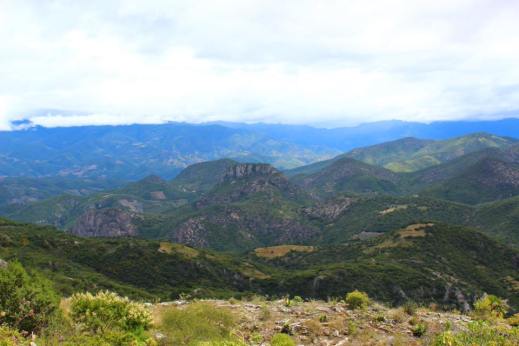 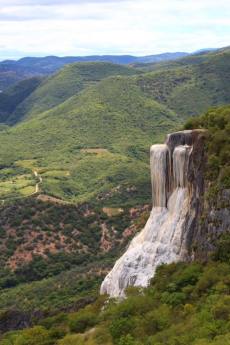 The next stop was the town of Mitla, where we visited a complex of Zapotec ruins that boast beautiful stone carvings. We could actually walk down into the tombs. It’s amazing to me that this area of Mexico has an average of 300 earthquakes per year, and these structures that are thousands of years old still stay intact. 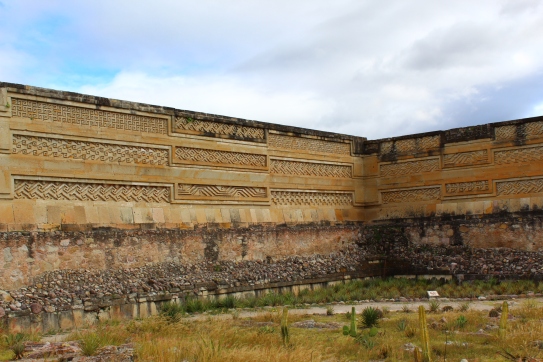 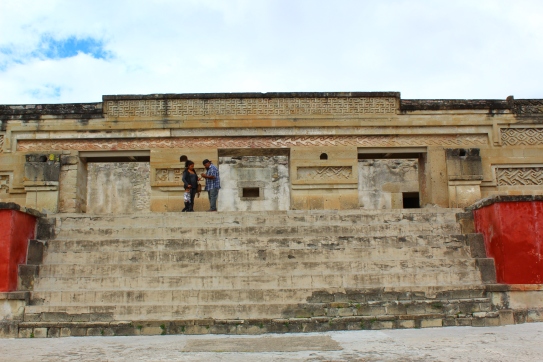 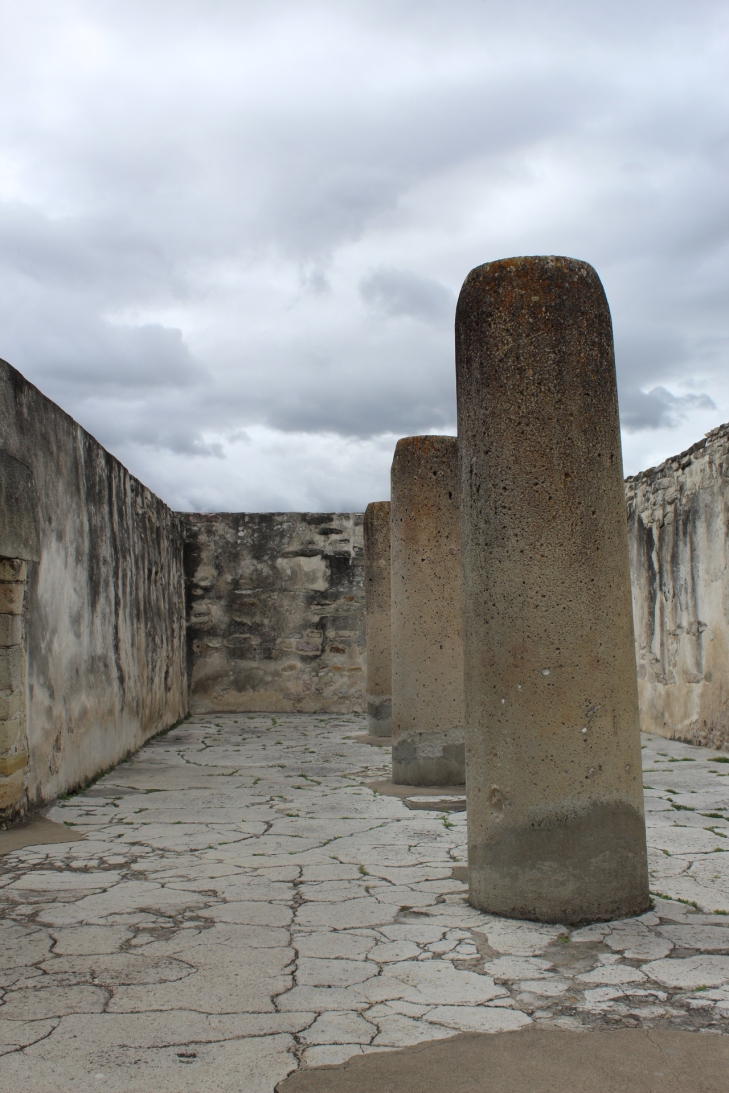 Then we stopped for a buffet lunch near the town of Mitla. Today was the day I finally tried a fried grasshopper. Just one 🙂 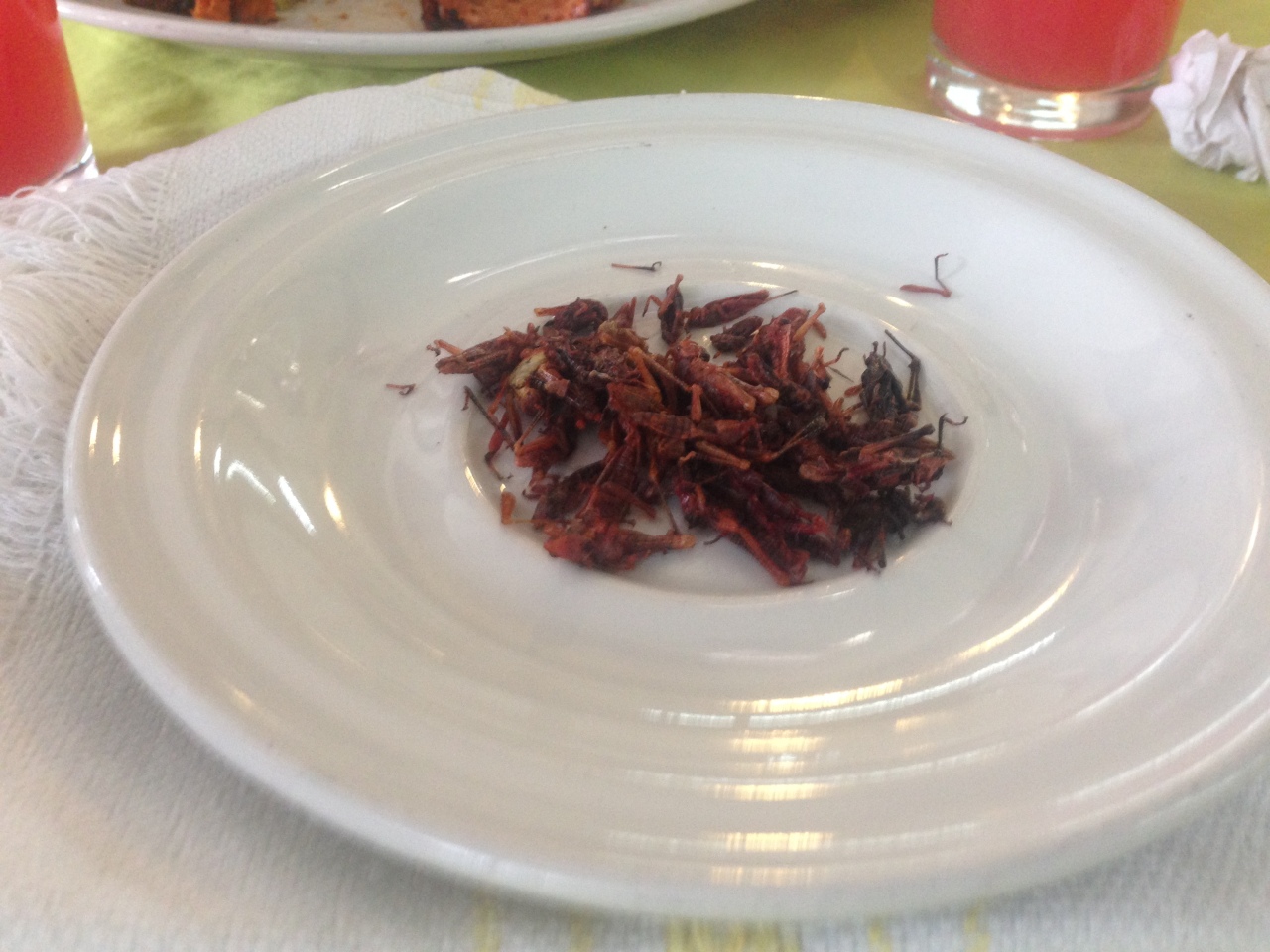 The next stop was the Mezcal factory. I tried  3 different kinds. 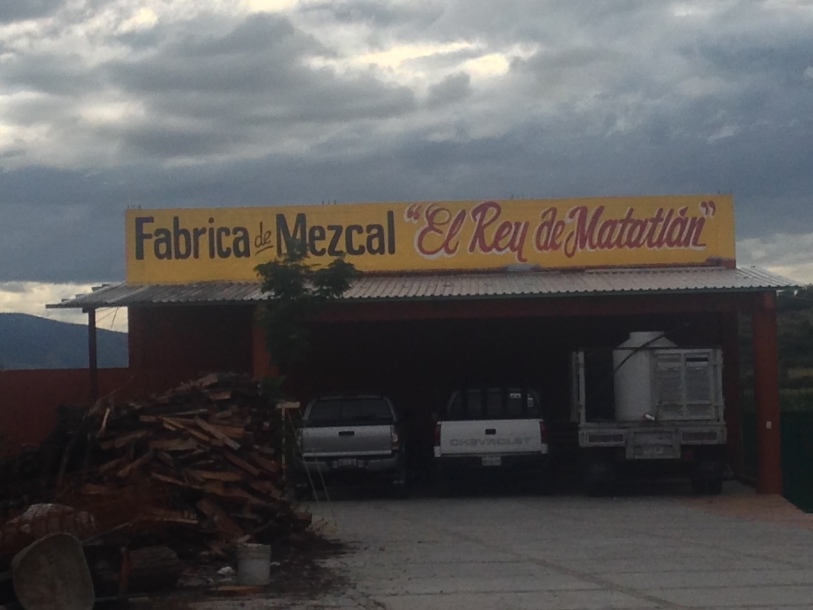 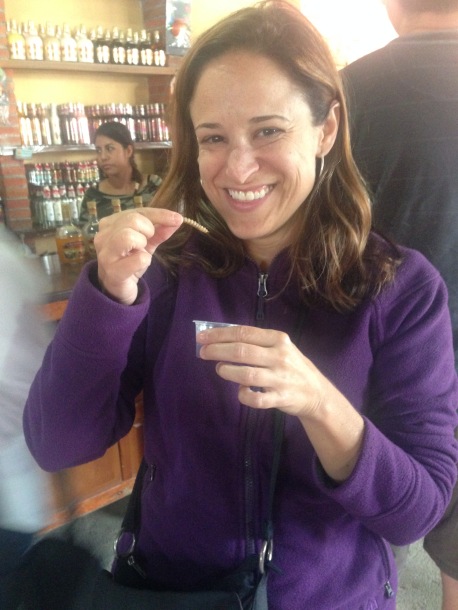 Pit stop on the way back to Oaxaca City 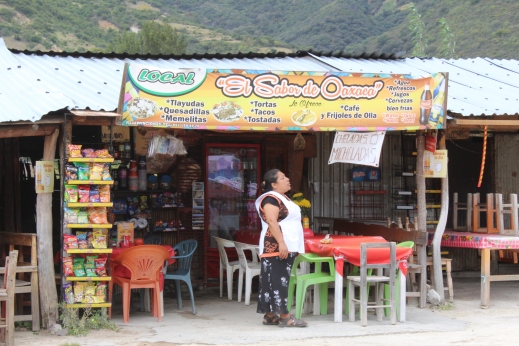 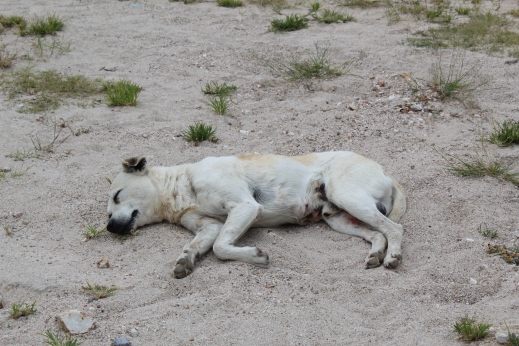 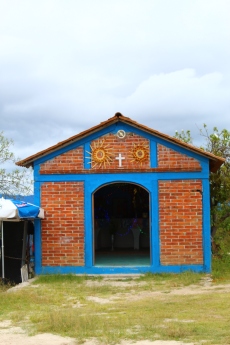