I’m so fancy. A few funny memories of past trips

Travel is not always pretty. In a foreign country, you can be put in the most awkward and hilarious situations because you don’t know the language or the culture, or you’re just having a dumb moment.

I spent 6 weeks studying abroad in Spain when I was in college. On my very first day in Madrid Spain, which was also the very first day out of the country in my entire life, I get to my hotel room and go to use the bathroom. The very first thing that happens, lucky me, is the toilet stops up. I run down to the front desk to ask for a plunger. I do not know the word for plunger. I’m saying, “hay un problema en el bano. Necesito ayuda.” (There is a problem in the bathroom. I need help) I’m trying to act out the action for plunging a toilet because I don’t know the word for plunger.  I will never forgot the look on that lady’s face.  Mortifying at the time, hilarious now!

When I was in Peru this past April, I saw something really funny. I had a day in Cusco to myself to wander around the markets and the Plaza Mayor. I’m walking down the street in Cusco, and I saw this guy walking towards me heading the opposite direction. He was dressed in full Andean clothing, like this. 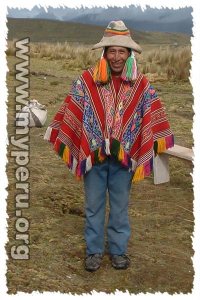 He had headphones in his ears and was singing along loudly with “I’m so Fancy” by Iggy Azalea!

I always remember these unplanned, random, hilarious moments the most.

What are some of your funny travel memories?