The first sound in the morning is the clip-clop of horses’ hooves on the cobbled streets followed by the cries of old men selling bread from bicycles- “El Pan! El Pan!” Open your eyes, gaze up at the high wooden louvers of your 200 year old colonial room, and try to convince yourself you’re in the 21st century. This is Trinidad.

It was a 3 hour drive from Santa Clara, which I slept through after the previous night of partying and 3 hours of sleep.

Upon arriving in the town, we checked into our accomodations and did a walking tour of the town.

It was Christmas Day.  So why did I want to come to Cuba for Christmas and New Year’s?  I have spent Christmas for the last 9 years with my ex-husband and his family. So, this would be the first Christmas not spent with them and I knew it would be difficult.   I very much like the idea of traveling over the holidays. I saw lots of families, couples, and solo travelers doing just that.

Christmas was once a regular holiday in Cuba, as it is in many countries in the world. Like many states when a socialist or communist government comes to power, Cuba officially embraced atheism after the revolution. Fidel Castro saw Christmas as unnecessary due to its Christian origins, and as such, Christmas was removed from the official list of holidays in 1969.

It was still celebrated, but not in a major way.

Christmas trees and decorations disappeared from public places and it stayed that way for almost three decades. Pope John Paul II was the first pontiff to ever visit the island nation, and so Christmas in Cuba was reinstated in his honor, just ahead of his 1998 visit. It was once again celebrated in public, and was officially made a holiday again. Christmas is perhaps more subdued than in other places, and there are less decorations than you might expect, but Christmas had once again returned to the island. It’s perhaps the perfect place to celebrate Christmas if you feel that the occasion has become overly commercialised.

This is certainly not the case in Cuba.

It’s a time to spend time with your family, to perhaps spend time in church, but not to spend a lot of money. 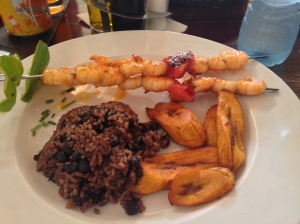 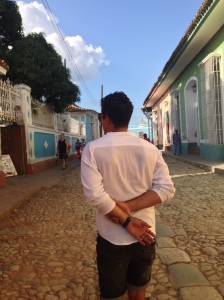 These steps lead up to the Casa de Musica 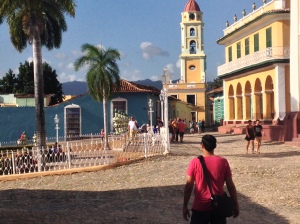 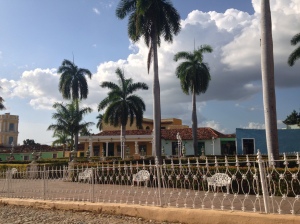 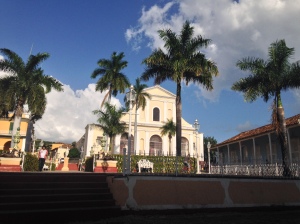 A bed in the dining room? why not

Cuba is home to a variety of syncretic religions of largely African cultural origin. According to a US State Department report, some sources estimate that as much as 80 percent of the population consults with practitioners of religions with West African roots, such as Santeria or Yoruba. This is a Santeria temple in Trinidad.

After our walking tour, we had a little meeting about options for the next day. This dog was already sleeping in a nice shady spot in the square, but he moved over to our group to sleep there while we talked.

We had dinner at Guitarra Mia. Check out the tostones stuffed with minced crab. 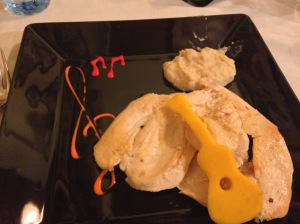